This event is now sold out. Please contact the organizer for more details or view other events from The American Chamber of Commerce in Singapore.

Ms Sim Ann, Senior Minister of State in the Ministry of Foreign Affairs and the Ministry of National Development will speak about the government's COVID-19 strategy to help Singapore reconnect to the world safely, and Singapore's role as an open and effective regional business hub. She will also address the Singapore-US bilateral relationship, and how the region and the US can deepen cooperation.

* Cancellation Policy: No refunds will be provided for cancellations. Replacements will only be accepted by October 11, 2021. 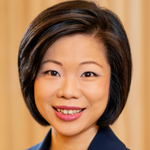 Sim Ann is Senior Minister of State in the Ministry of Foreign Affairs and the Ministry of National Development. She is a Member of Parliament (MP) for the Holland-Bukit Timah GRC.

Sim Ann was educated at Hwa Chong Junior College from 1992 to 1993. In 1997, she obtained a B.A (Honours) from Oxford University. She was awarded an M.A from Stanford University in 2009. Sim Ann has also obtained a Graduate Diploma in Translation and Interpretation from the Nanyang Technological University. Sim Ann started her career in 1998 as an Assistant Director for Finance Policy and Planning at the Ministry of Health. From 2000 to 2003, she worked at the Ministry of Home Affairs as an Assistant Director for Implementation Planning, before moving to the Ministry of Trade and Industry, where she was Deputy Director for Trade until 2006. Between 2007 and 2009, she was the Regional Director (East China) for IE Singapore and in 2009, she became the Director for the National Population Secretariat. She left the Civil Service in 2011.

Sim Ann first stepped into the political arena when she contested in the Holland-Bukit Timah GRC during the 2011 General Elections. She is currently the MP for the Holland-Bukit Timah GRC as one of the four-member People's Action Party (PAP) team led by Minister for Foreign Affairs, Dr Vivian Balakrishnan. The other PAP members are Christopher de Souza and Edward Chia.

Connect with 26 people attending this event